Phenomenal Woman
Dr. Maya Angelou has always been one of my favorite writers. Her writing is a gift. She is a gift and so are you.

Lately, I've been thinking about how grateful I am for the privilege of being a woman.
This poem by Dr. Maya Angelou says it best. Every human being on the planet has a story. The world would not be the same without you. To all the phenomenal women.


To the Good Life!
Kendra

pi·o·neer [pahy-uh-neer].
noun
one who is first or among the earliest in any field of inquiry, enterprise, or progress

verb
to lead the way for (a group); guide


Most people look at you like you're crazy when you say you're going to run a half marathon. I get it, because that's how I look at people who sign up for full marathons.  Running makes me feel strong- mentally, physically and spiritually. I enjoy the fact that it requires a level of endurance that most of us don't believe we are capable of sustaining.  Marathon running requires a deeper level of commitment, discipline, than most of us are used to.

I started training for a half marathon 2 weeks ago. Prior to the training plan, I was blessed to find a running partner who would run with me at least twice a week, consistently. Running with her caused me to push my body beyond what was comfortable and it's helped make me a better runner in the process. I've started to recognize that many times I thought I was pushing myself, but when I would stop, I realized I still had so much more left to give.

For my training, I run with a running group called Black Girls Run! (I am the ambassador for the Phoenix metro area.) It's hard to fully understand the value of running with a group until you've done it. Knowing that other people are depending on you, that you share common goals and being apart of a sisterhood are just some of the reasons it means so much to me to run with a group .

On our first run out as a group, one of the ladies that I knew would keep us on a great pace was asked to be the lead runner for us. She accepted the role and we were off. Because she had no experience with running that particular path, there were several times where either I or one of the other ladies had to yell out to her to keep her on the right path. As we were running I realized this must be what it must be like to pioneer anything. When you are the first to do it, you're going to make mistakes. You're going to go in directions that will make it take longer than it would have if you were already familiar with it. You're going to have to risk the possibility of failure-that because you're out front other people will have a front row seat to your mistakes. But are you going to let that stop you? Or are you going to look at the fact that because you keep going you end of up blazing a trail for others to follow?

I realize that some of the things that I've been called to do, may not have a clear path that I can follow, because I'm the one who's supposed to blaze the trail. With the Holy Spirit as my guide, I'm supposed to tread over fear, discouragement and complacency on this path to the rich and satisfying life that God has promised us in John 10:10. By doing so, my husband and I, both, leave a path for generations that will come after us to follow.

What about you? How are you blazing a trail in your own life? What are you called to pioneer for the generations after you?

To the disciplined life!
Kendra

I am recommitting myself to updating this blog regularly. I want to have a document of my journey to a more disciplined life.

Disciplined living isn't just about the things you "can't" or "shouldn't" do, but it's also about making room for your priorities. I value relationships. My most important relationships are with the man I married and the little people we are raising everyday. Helping my children develop their passions is one good way for me to not only learn discipline but help impart it into them, as well.  My oldest daughter has a passion for food. The last few weeks we've been preparing at least one new dish a week together.  The first week in August she wanted to make homemade french fries.  I believe in taking foods you love, including comfort foods and putting a healthy spin on them. Here's our version of homemade french fries.

Step 1: Nyah doesn't like the skin on the potatoes. She peeled them and sliced them like french fries. 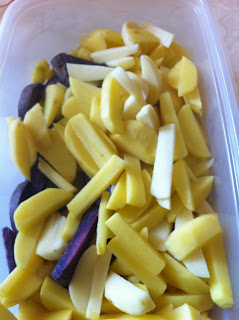 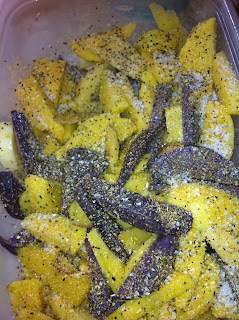 Step 3: Toss in olive oil. Make sure you it covers all of the potato.  It's going to be cooking in the oven. 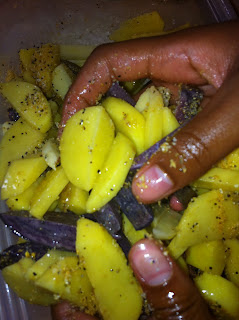 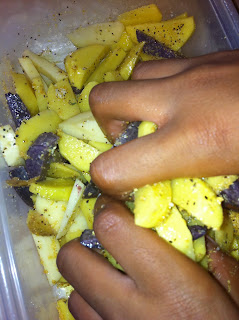 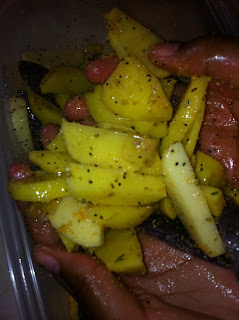 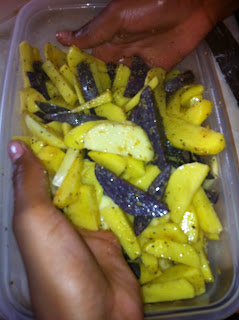 Step 4: Spread out on a cookie sheet or broiler pan. Bake in a preheated oven at 375 degrees until tender. Then broil until they are crispy brown.

Step 5: *My fave step* Watch everyone in the family enjoy this new version of french fries.

Our entire family enjoyed eating these. We didn't follow any recipe. We just tried what we thought would taste good to us. They are a new favorite for us.

To the Good Life!
Kendra
Posted by Kendra at 7:28 AM 4 comments:

I can't believe it's been 2 weeks since my last post.  I won't wait that long again before I update.  I have so much to share but I won't put it all in this one post.

I have fully immersed myself in this journey to a more disciplined lifestyle.  I am committed to winning.  I have the plan that I need, the accountability I need and the help I need.  I am praying daily about the choices I will have to make each day.  I've been down this road and I know I can not do it without God's help.


I'm focusing on the benefits of a more disciplined life rather than the work that's involved.  In tomorrow's post, I will share the plan I will follow for the next  347 days.

Are you already pretty disciplined? What tips/wisdom would you share with me?
Posted by Kendra at 1:47 PM 1 comment:

Day 4: I want the rewards but not the work.

I am 4 days in to living a more disciplined life and so far so good.

I believe accountability is really what's going to help me see my goals through to the end.  Therefore, I talked it over with my hubby and we're going to sign up with a budget coach. According to Dave Ramsey, personal finance is 20% head knowledge and 80% behavior.  I agree 100%.  I know what I should be doing.  I know how to budget, crunch numbers, but my actions aren't lining up with what I know.  I'm ready to humble myself in every area of my life.

Another goal that's important to me has to do with my eating habits and exercise.  I am reading Lysa Terkeurst's book, Made to Crave.  If you haven't read it, you should.  It has already ministered to me.  It's amazing to me how similar our life experiences can be.  During my devotional time this morning, I feel like my  eyes were opened to a simple truth. Best-selling authors reveal their journeys with God through their books.  They had to live what they wrote about.  There was no shortcuts.

Reality check: I want the rewards but not the work.

This was hard to realize about myself, but I know it to be true.  I have been talking about the weight I want (I'm going) to lose for years now, but I've never saw it through until the end because what was being required of me felt like too much to ask.

As I'm moving forward in this journey, I'm praying the Lord will help me endure to the end.
Posted by Kendra at 11:54 PM 1 comment:

Today is the first day of the rest of my life

The purpose of this blog is to keep a record of my journey to a more disciplined life.

I am a firm believer in living intentionally, purposefully. But I don't believe you would know that by looking at my life.  I'm really good at starting things.  Finishing them - well that's another story.  I happen to have some great role models in my life.  Three of them are here, here and here.  They each have really committed themselves to an area (I desire to succeed in) until they've seen results in their lives.  They will be apart of my inspiration and my accountability on this journey.

Working on something Committing to this journey/experiment/goal for one year feels like a good time frame.  A year is long enough to make mistakes and still win.  It's long enough to make some paradigm shifts in my thinking.  It's long enough that endurance and discipline will be required to see it through to the end.  Therefore, my challenge starting today, Monday 3/28 is to see what I can accomplish in the following areas in the next 365 days:  healthy living, personal finances and business.

I will explain the goals and my plans in upcoming posts.


I believe the areas in our lives that give us the most trouble, the ones that can leave us feeling constantly feeling defeated, can actually be a red flag to our spiritual condition.  Although there isn't anything about my relationships on this list,  I have dreams and goals where my relationships are concerned. I know that my relationship with God and my family are my highest priorities.  I also believe the disciplines I'm committing to will help me in every area of my life, the invaluable things (my relationships) and the seemingly insignificant things (flossing my teeth, daily).

Today is the first day of the rest of my life.

Lord, I pray you will help me to keep my eyes on the prize.  Please, help me to not grow weary in doing what is right.  Help me not to loosen or relax my courage and faint.  You said I would reap a harvest of blessing if I don't give up. I need you. I know I can NOT do this without You.

To the disciplined life!
Kendra
Posted by Kendra at 12:18 PM 2 comments: